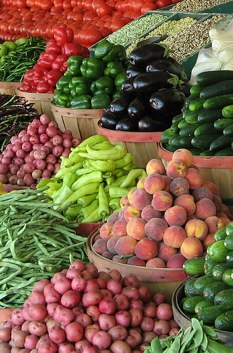 …Rob Gardner, a Chicago- based locavore and editor at large for thelocalbeet.com, believes some critics have created an extreme caricature of the locavore as someone who forbids the consumption of any non-local food to suit their arguments.

“I don’t think anyone is advocating such extremism,” said Gardner, who still drinks coffee, eats citrus and uses olive oil and spices despite his Midwestern residence. “It’s just not realistic. At thelocalbeet.com we advocate a modest approach, eating food when it comes into season and when you have an opportunity, to do something like choose Michigan apples over Washington apples.” One of the most compelling arguments against locavorism comes from the camp that pits — fairly or not — local farmers who use pesticides and synthetic fertilizers against organic farmers.

“Local chemical farming contaminates local communities,” said author Maria Rodale, whose new book, “Organic Manifesto,” advocates nonchemical farming everywhere. “It’s just as bad as buying it from other countries; you’re just saving the shipping cost, which is by no means the biggest carbon cost of the food.” Gardner mostly agrees with Rodale but said that it’s only by supporting your local farmer that you can develop the kind of rapport and influence that could encourage more sustainable farming.

“Buying local can eventually bring in better farming practices to those areas,” he said. “Not to mention fresher, tastier, healthier food.”

The ideal for most is to find sustainably farmed local produce from farmers with whom buyers can develop a dialogue and relationship. And with the continuing proliferation of American farmers markets, it is becoming more possible all the time.

Read more of this article in the Denver Sun and think more about “lowest possible price” as a future model (or not) for true sustainability.