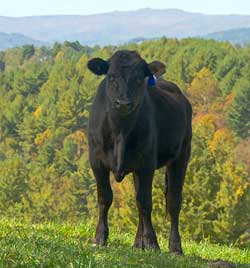 We’re flat out of predators in most parts of the world, and it’s hard to imagine, in the short time that we have to deal with climate change, ending the eating of meat and returning the herds of buffalo and packs of wolves to all the necessary spots. It’s marginally easier to imagine mimicking those systems with cows.

The key technology here is the single-strand electric fence—you move your herd or your flock once or twice a day from one small pasture to the next, forcing them to eat everything that’s growing there but moving them along before they graze all the good stuff down to bare ground. Now their manure isn’t a problem that fills a cesspool, but a key part of making the system work.

Done right, some studies suggest, this method of raising cattle could put much of the atmosphere’s oversupply of greenhouse gases back in the soil inside half a century. That means shifting from feedlot farming to rotational grazing is one of the few changes we could make that’s on the same scale as the problem of global warming. It won’t do away with the need for radically cutting emissions, but it could help get the car exhaust you emitted back in high school out of the atmosphere.